Tucked away on the border of Vietnam, Myanmar and Laos one will find, China’s hidden paradise Yunnan. Snow-capped mountains, sparkling blue rivers, charming reflective lakes, unique rice terraces and beautiful deep gorges, the charm of Yunnan is found in the varied mix of its sceneries. Yunnan often referred to as the place south of the colourful clouds, aptly captures the essence of this diverse region not only because of the landscape but because of its distinct mix of ethnic minorities. Many of the twenty-five ethnic minorities can be found living along the Three Parallel Rivers area.

The Three Parallel Rivers area encircles the majestic land enclosed by the three great rivers of Asia the mighty Yangtze, free-flowing Mekong and the wild Salween rivers. This protected and quite area preserved and natured for generations by the local people has become known as ‘Shangri-La’ the “Eden in dream”.

Shangri-la, which means “sun and moon in the heart” in the Tibetan language is a place that will leave you feeling as if you have the sun and moon in your heart. It offers an earthly paradise for you to explore which is bursting with hours of hardcore adventure. Touring Shangri-la also provides you with the opportunity to explore surrounding areas such as Lijiang, Tacheng,  and Meili Mountain.

The Old Town of Lijiang

Lijiang is a city in the northwest part of China’s Yunnan province and has more character than just a historic old town. The old town is distinguished by its aged cobblestone streets, maze canals and Central Market Square where one can spend time shopping or sampling the earthy cuisine at local restaurants. A jewel of Lijiang is, Black Dragon Pool famed for its views of the Jade Dragon Snow Mountain range.

To the northwest of Lijiang and the side valley of the Yangtze River is Tacheng village. Here one will find Tacheng Nature Reserve which is home to the Yunnan Stub nose monkeys, who are currently threatened with extinction. This rare species of monkeys are exclusive to the remote forests of southwest China and northern Myanmar. The Tacheng Nature Reserve is one of the several places where one can witness the Yunnan Stub nose monkeys in the wilderness.

Close to the northwestern boundary of the province and bound by the Salween River on the west and the Mekong on the east is the Meili Snow Mountain range or the ‘Prince Snow Mountain’. Here one gets to experience the most awe-inspiring view of Yunnan’s numerous snow-clad ridges and peaks. When the sun glows through the snowy peaks of the Meili Mountains, the golden rays illuminate the extraordinary shaped low-floating clouds, creating a view that is indescribable and unforgettable. 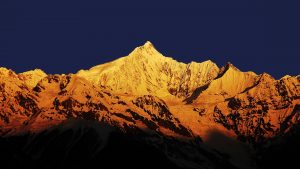 Is the travel bug growing in the pit of your stomach? Are your fingers itching and your legs twitching? Let us plan your unforgettable travel trails so all you have to worry about is enjoying, recalling, and sharing your trail tales with your friends.

Get Social With Us!

FROM THE TRAIL JOURNAL

What to bring on a Photographic Expedition
3

FROM THE TRAIL JOURNAL